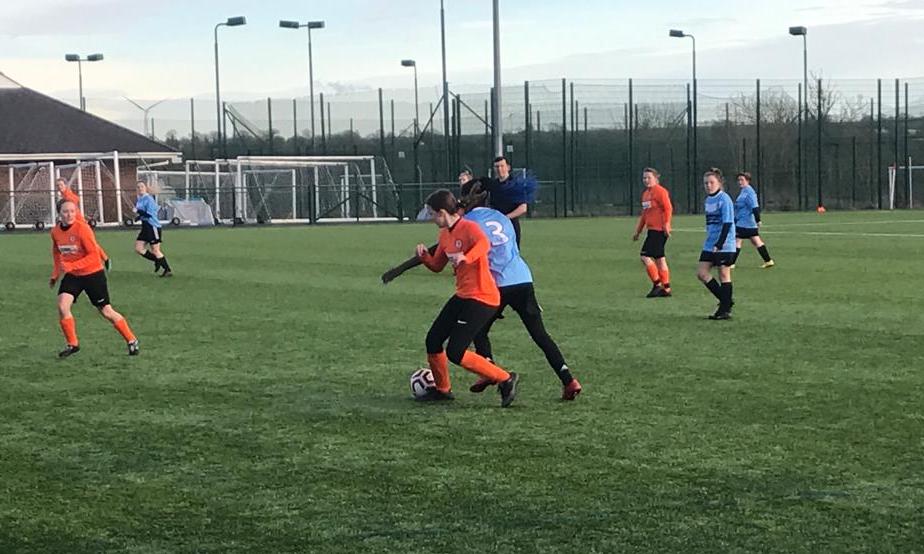 Rugby Borough Women welcomed Chelmsley Colts Ladies to a very bleak and windy Kilsby Lane, it was good to see Rugby back playing after so many games being called off due to the recent storms.

The game started well for Rugby who were immediately creating lots of chances but Chelmsley keepers saved every attempt, also a lot of missed chances too. The wind made it very difficult to play against but Rugby battled on.

Borough looked good with lots of nice link up play and good movement as more chances came but they still couldn’t convert.

Rugby got the second half underway, this time with the wind, making it a bit easier for the link up play to work. Boroughs forward line of Charlotte and Sarah had lots of chances again but were denied by the keeper. Finally, Charlotte ran through the Chelmsley defensive line and scored with a bit of help from the post! Rugby 1-0.

Rugby settled and were now controlling the game well, the defence was strong and didn’t let anyone past. A quick throw from the half way line for Rugby and Sarah latched onto it running past three Chelmsley players before slotting it past the keeper. 2-0 to Rugby and well deserved!

Rugby again created lots of chances but just couldn’t finish to add to the score. They could have been in double figures on another day with more clinical finishing.

Some nice play out saw Charlotte finish off a lovely piece of link up play, scoring to make it 3-0 to Borough women.

The game finished 3-0 to Rugby who had many chances to make it a lot more. Rugby’s defence were very strong and only let the opposition get one shot all game! Huge congrats to Nat #betterthanbeth who was in goal and kept a clean sheet!