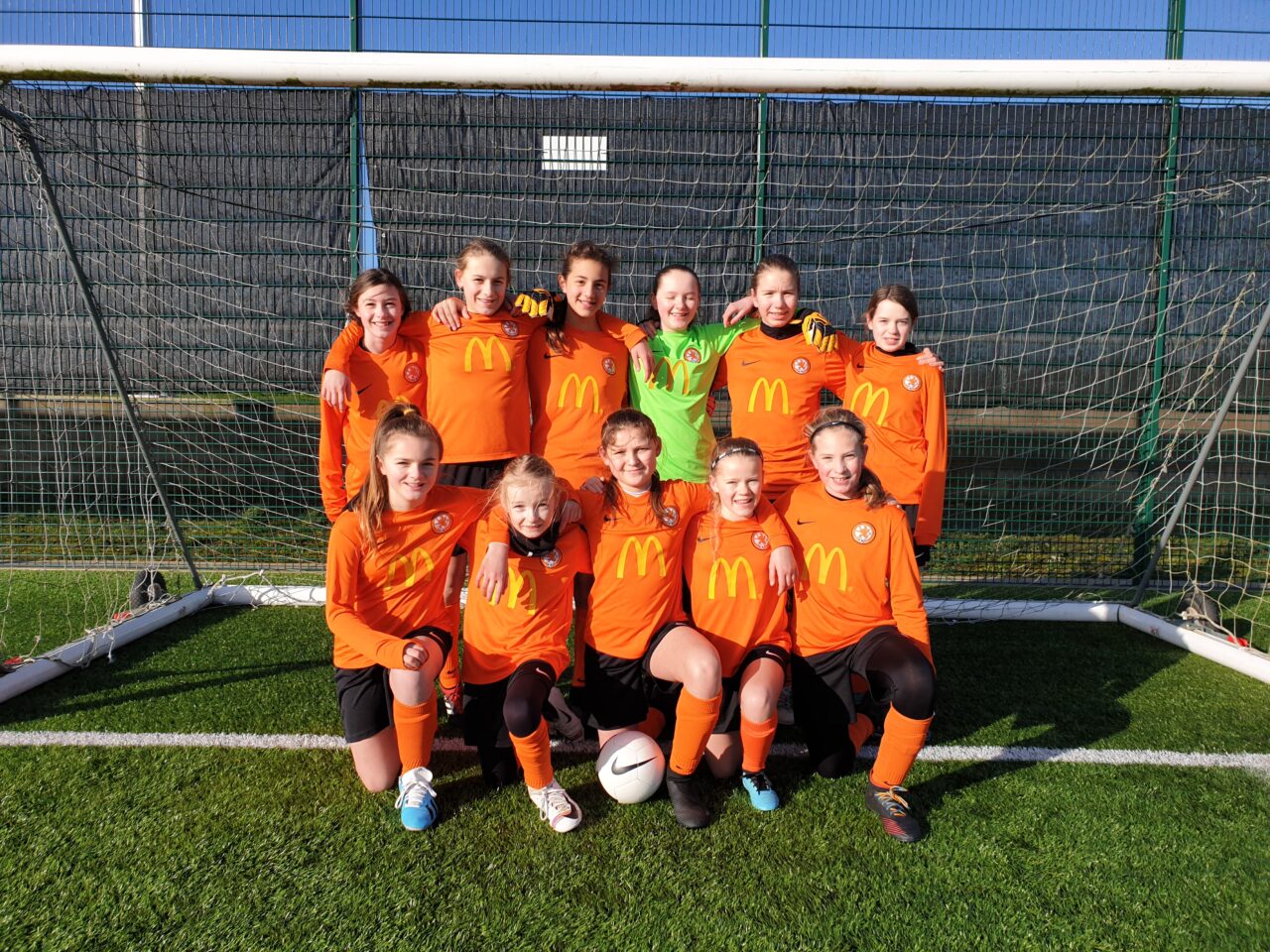 A really strange experience playing a shortened version of a full match and calling it a double header. 2 x 15 minute halves with a couple of minutes half time played twice, home and away so no home advantage to the away team. We understand why the league are having to resort to this but don’t necessarily agree with the format, they have a huge backlog of games to catch up on.

In a 1 hour game we’d have won 6-2, probably should have been more but that’s a different story and it is what it is now. We should have took the chances but we’re definitely not fans of this format!

The first game got underway once the pitches had been set up and it was clear from the start it was going to be tough match with both teams putting themselves about. Some tough tackling ensued from both sides with Oadby just edging the fouls as they tried to break up the better passing moves from Rugby. Madi and Melissa were working very hard, finding lots of space down the wings before sending it in to Millie and Ella but they just couldn’t get the ball out of their feet quick enough for the shot.

A lovely passing move broke the deadlock, it almost included all of the Borough girls with an assist from Lila into Ella who stroked the ball home for 1-0. A much better take from Ella this week.

Oadby kicked off and the ball was launched up field for Jasmine to collect, with no challenge or closing down, she ran with the ball, skipped around a couple of midfielders and unleashed her customary left boot onto the ball which sailed into the goal for 2-0 giving the keeper no chance.

Holly was working hard on the left wing, swapping with Madi into the centre, working with Lila and Izzie who were trying hard to get tackles in and win the ball.

The half time whistle went after 15 minutes which was strange and a very quick chat, followed by being back out on the pitch to start again. The team talk consisted of more of the same please to which Jasmine took on board fully and smashed a ball from the half way line, this time into the wind which held it up and sailed over the keepers head, an effort to catch it was fumbled and it fell into the net for 3-0. Maya sustained an injury with a hefty kick just above her knee so took some time out to walk off, a good game so far with some great tackling, Marley was also getting stuck in and winning balls in defence and midfield with good running and passing from both to get the ball forward quickly. Erin hadn’t really been tested but was quick to collect any loose balls when needed.

Jasmine scored her third of the game to get a hat-trick and a match winning performance before the full time whistle which blew after 30 minutes of play, again very strange! A 4-0 win in the first of our double headers.

The ‘second’ game got under way and something had clicked with Oadby who looked better after their team talk, getting to the ball faster and using it better but it was Millie who scored first with a shot that rebounded off the post into the net. Rugby 1-0.

Oadby won a corner, the ball was launched perfectly to the unmarked Oadby striker who confidently spun and left foot volleyed it into the goal. Some sloppy defending cost Borough there, picked up she would never have had the time to turn and take the ball on the volley. Lessons to be learnt for Rugby.

Rugby still created chance after chance and with some better finishing could have scored more but it wasn’t to be.

The half time whistle blew for an even 1-1

The second half kicked off once again, more chance created by Borough but for some reason the shooting was poor this week, weak left foots, side netting, misses, when it was on the left foot, tried to get it on the right but took too long and lost it, trying to run it into the goal instead of quick powerful shots, more work in training required. We talk about that split second, space, shoot all the time.

Jasmine scored to make it 2-1 Rugby with around 8 mins left. Oadby hit a shot after finally getting through the defence, a weakish shot that somehow found its way into the net, like watching it in slow motion, it just tumbled into the goal. Still don’t know how it managed to find the net but it did and Oadby got the equaliser for 2-2. Jasmine tried from kick off but was just too far out against the wind and no matter how hard the girls tried in the last 5 minutes, they just couldn’t get a winner.

If we have to play the format again, we’ll probably change a few things next time to an all out attacking side and purely focus on fast goals.

If we’d have taken all of our chances, we probably wouldn’t be moaning about the format either.