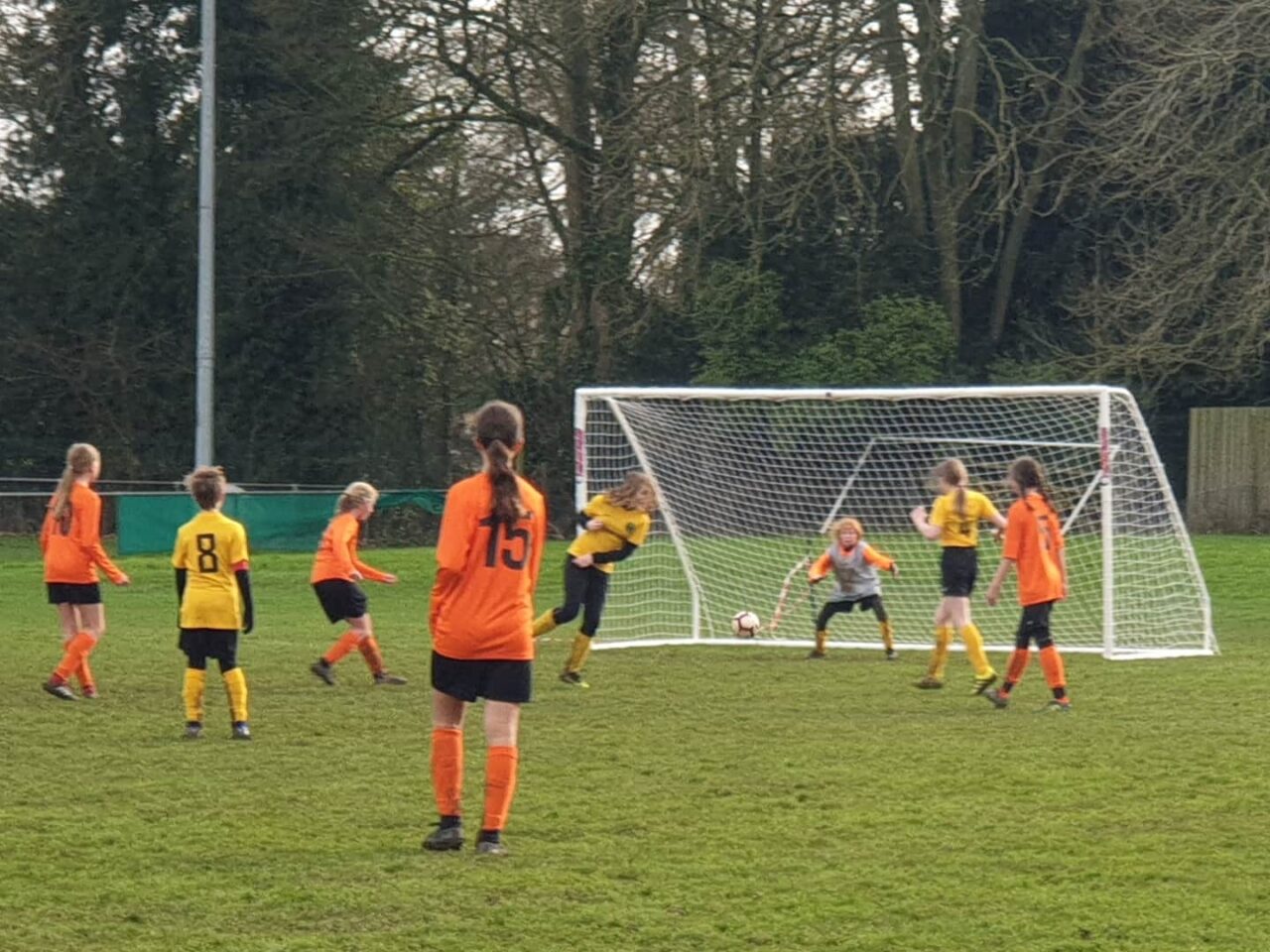 Our furthest away match to date with a 1hr 20m trip to Oakham United Girls in Barleythorpe and a great little set up they have, all credit to their very welcoming staff and nice clubhouse.

An introductory greeting with Oakham’s coach followed by a brief meeting with referee Martin and the girls, a respect handshake and the match got underway.

It was clear from the start that Oakham are a new team, their coach informed us that they hadn’t been together long so also very new to the league as well, might I add a very competitive league too. Rugby started the game very well and Oakham tried hard to shut down our passing game, they were very spirited and won some tackles but never really made good use of the ball, usually giving it straight back to Rugby with a misguided pass or we won it back in the tackle.

The experienced Borough Girls were too strong for Oakham’s newcomers, Jasmine started the scoring off after 2 minutes with some great dribbling down the left side and an unstoppable shot. Melissa was the same down the right side, running in on goal to unleash a shot which was probably going wide but took a nasty deflection into the net for an own goal.

Jasmine scored her second goal on 12 minutes, again after some great work on the left wing.

Oakham tried very hard to get through Rugby’s midfield of Madi and Holly who were both working hard, when they did the defence of Maya and Marley were just too tough to break down, immediately breaking on the counter. Madi scored next on 20 minutes and again on 21 minutes after breaking through from midfield and collecting some misguided passes.

Melissa scored almost immediately after the restart with some neat passing interchanges with Millie down the right side. Millie then scored 2 quick fire goals nipping in to collect a couple of poor clearances and goal kicks.

This open the floodgates a little and as much as Oakham tried to soak up the pressure, Rugby just proved too strong for them with some neat passing moves and further goals going into the half time break 0-9 up.

The second half went much the same way although we did take a player off and also brought the retreat rule back to give Oakham a chance to play the ball out from the back. Rugby were by far the stronger team, even with a player less. Lila scored after the re-start, starting a little better in the second half and looking a bit brighter. Melissa scored her second after some great work down the right wing, causing all sorts of problems from Oakham who couldn’t cope with her pace or skill. Jasmine scored 2 more quick goals with her powerful shooting giving the keeper no chance.

Maya moved up front but just couldn’t get on the end of anything, she almost had one ready to tee up when Marley nipped in and took it off her toes to slot into the goal. Lila scored another on 50 minutes, Millie scored on 55 minutes to get her first ever hat-trick. Melissa scored another a minute later, also getting her hat-trick and very well deserved after some excellent wing play and great crossing, earning her player of the match too for a fine performance. Marley finished the scoring on 58 minutes to get her second of the game.

Full Time 0-17. Credit to Oakham, they never stopped trying right up to the final whistle. It could have been a lot more but a change of keeper in the 2nd half who made some superb stops. Erin was a bystander once again, hardly called upon all game.

Well done to all of the girls and huge congratulations to Millie who scored her first ever competitive hat-trick! Well done Millie!

Thanks to Josh for running the line. We welcome Oakham to Kilsby Lane next Sunday for the reverse fixture this weekend, playing on the 3g!